Friends – things are super crazy in the Covington house as I prepare to head to San Diego in a couple of weeks for the Romance Writers of America conference and the glitzy gala for the RITA awards. In case you didn’t know, the RITA’s are like the Oscars – but for romance writing – and I’m still pinching myself that I got the call and that my book, ONE LITTLE KISS, was nominated in best novella category.

That calls for a celebration . . . right?  I thought so too.

So, for the next two weeks I’m going to feature one of my fellow nominees and give away their nominated book. And one very lucky reader will win a $25 Amazon GC! 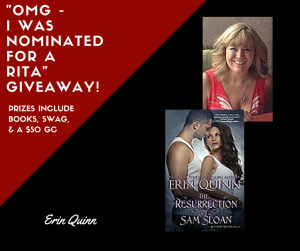 Trapped in the body of a human, the Reaper is about to fall in love with a woman he was never meant to have . . .

Blurb:  When a reaper is trapped in Maggie’s estranged husband’s body, she knows only that the man with her husband’s eyes feels like a stranger . . . a compelling, seductive stranger who touches her in ways her treacherous husband never could.  She wants to trust him, but what about the ghost who haunts their home, implicating him in a gruesome murder . . . .

She shook her head, but her gaze had fixed on his mouth and the Reaper took the chance before she changed her mind.  Her lips were soft and silky.  Against his, they felt like nothing he’d imagined and everything he’d imagined.  There were no memories of this in Sam’s banks and he was glad for that.  He wanted this experience for his own.  Sensations shot through him in sharp, hot waves, a torrent of passion and lightning.

She made a soft sound of surrender in her throat, murmured something that sounds like, I’m a fool, and then her arms twined around his neck and she kissed him back.

The feel of her; the smell of her, the sweet intoxicating scent . . . .  All of it filled him, pushed out the vestiges of the man Sam had been, overwhelmed the foundation of the Reaper inside, and forced them both into the moment that was now.  Here.  Her.  Him.

Maggie tugged at his shirt, pulling it free of his jeans, then took his hand, leading him up the stairs and into the bedroom she’d banned him from.  The door closed behind them.  She locked it.

“I want you so much that that I can hardly breathe,” he said, that hint of accent that only appeared at rare times adding a husky rasp to his voice.  “I’ve been thinking about this since I opened my eyes.  Since I came to life.”

There were more words he should say, feelings begging for a voice, but the swamp of emotion made speaking an impossible feat.

He took her face in his hands, kissing her like this life that he’d never expected to have depended on the breath he stole from her.  She tugged at his shirt once more and he stepped back only long enough to strip it off.

Her eyes molten, her pulse beating away at her throat, she stared at his bare chest with a hunger that threatened to consume him.  His hands were big and clumsy as he gently pulled her shirt over her head when he wanted to rip it off.  He dropped it on the floor and simply stared at the perfection he’d unveiled.  Her skin was as smooth as alabaster, flawlessly beautiful.  A bra the same shade as her skin held her breasts in an embrace of lace and satin.  He touched one gently, groaning at the weight, the softness.  He bent his head and covered it with his mouth, sucking the hard nipple, letting the lace rasp against his tongue, acting on instinct he didn’t question.

“Take it off,” he asked, his voice so deep it throbbed against the quiet.

She arched back, hands meeting between her shoulder blades as she unfastened the bra and shrugged it off.  The stretchy pants came next without him even asking.  She stood before him in dainty pearlescent panties and his body went up in flames.

He’d never imagined that just looking at someone could make him feel so many things.  He wanted to take; he wanted to give.  He wanted to stroke, to bite, to kiss, to lick . . . to worship.

He lifted her up and turned her, laying her out on the bed so he could follow her down to the soft mattress.  Her body yielded to his and the perfection in the feeling wrenched another groan from him.  She was beautiful, inside and out.  He kissed her deeply, trying to slow his racing his heart.  Trying to experience each second, but everything came at him at once.  The sensations, the passion, the desire to please her.

He had her in bed, where he’d wanted her from the start, and he needed her like he’d never needed anything before.  She was gloriously naked and in his arms, where he felt she’d always belonged.  But fear suddenly crept in.  He’d never done this before and though he’d managed to toe the line between human and Reaper, he knew in a deep place that had been growing since the moment he’d opened his eyes, the time had come.

Reaper or human?  He couldn’t be both.

One came without the heavy burden of emotion, of mortality, of humanity.

The other came with Maggie.

****
Do you want to win a copy of Erin’s awesome book? Hop on over to my Facebook page and leave a comment on the post with her graphic. Here’s the link for my page.

And if you want to enter to win the $25 Amazon GC – use this rafflecopter . .